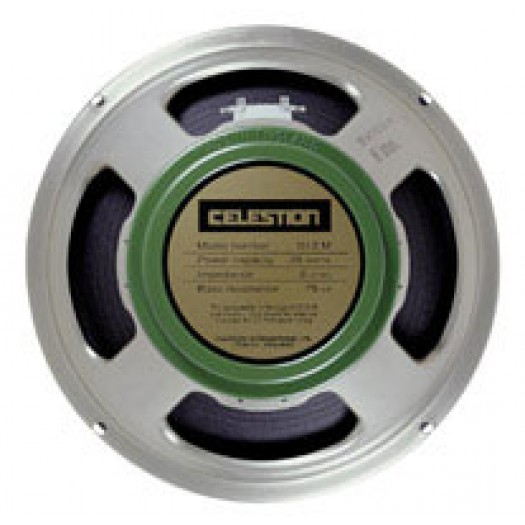 Customer Feedback
Description Celestion
﻿Celestion’s first guitar loudspeaker featuring a ceramic magnet structure, the G12M ‘Greenback’ presented almost as much magnetic flux to the voice coil as an Alnico formulation, but in a much more compact space. As a result the Greenback became the guitar loudspeaker that paved the way for use with higher power amplifiers. And, of course, the ceramic magnet presented its own unique tonal characteristics.
The Greenback has a loud and assertive character that sounds great through a valve amp pushed into overdrive. The speaker has evolved over the decades and still presents that instantly familiar woody tone, delivered with a knockout punch.
Nominal diameter 12inch, 305mm
Power Rating 25W
Nominal impedance 16 ohm
Sensitivity 97dB
Frequency range 75-5000Hz

Founded in 1924, Celestion has grown to become one of the world's largest and most innovative manufacturers of loudspeakers.
Responsible for the first ever dedicated guitar speaker, Celestion drivers have become the 'voice of rock & roll', delivering many of the most memorable performances by guitarists including Jimi Hendrix and Slash through to the current crop of high-octane shredders.
Our innovation in LF and compression drivers places Celestion at the heart of the professional sound reinforcement industry, relied upon by many of the world's leading manufacturers to deliver the sound of a great show.